In the 5th century AD, a little church was built on the present site of the Auditoire, over the ruins of an earlier church dating from the 3rd century and close to the Roman city wall around Geneva.  Burned down in the 11th century, it was replaced by a Romanesque building, the private chapel of the Bishop.  In the 13th century, it became the local parish church under the name of Notre-Dame-la-Neuve.  Over the next 500 years, it was burned and rebuilt several times, most notably in the gothic style in the 15th century with the generosity of the local apothecary, Clément Poutex.  After the adoption of the Reformation by Geneva in 1536, the city’s parishes were reorganised.  The church of Notre-Dame-La-Neuve was no longer required as a parish church and the building was used for a variety of other purposes. 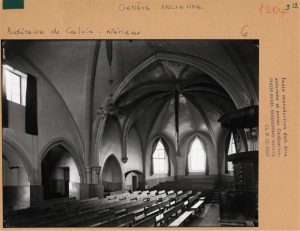 Geneva only had 12’000 inhabitants at that time but thousands of refugees, persecuted at home on account of their Reformed beliefs, soon began arriving in the city.  Especially significant were numerous Italian Protestants from all parts of Italy and a group of influential English-speaking Protestants known as the Marian Exiles who had left their homeland after Mary Tudor, a staunch Roman Catholic became Queen in 1553.  In November 1555 Calvin obtained permission from the city authorities for the English and the Italian refugees to worship in their native tongues in the church of Notre-Dame-La-Neuve.
Viagra sicher kaufen | cialis kaufen generika frankreich viagra pille Startseite – kanadisches Viagra arwkl – Sesam-Autismus
From 1557 onwards, at 7 a.m. on weekdays, before the working day began, open meetings took place in the Auditoire at which the Bible and Reformed doctrine were freely discussed.  It was here that Calvin, Théodore de Beze and their successors delivered their lectures, giving rise to the building’s modern name, the Calvin Auditorium or l’Auditoire de Calvin which simply means Calvin’s Lecture Theatre.  In 1559 the Académie de Genève, forerunner of today’s university, was founded in this place, its first Rector being Théodore de Beze.

Most of the English speaking refugees returned home after Mary Tudor’s reign came to an end and the Protestant Elizabeth became Queen at the end of 1558, while John Knox returned to Scotland and worked towards the founding of the Church of Scotland.  Many of the Italian congregation stayed on in Geneva and continued meeting regularly for more than two centuries.  While the English, Italian and Dutch-speaking communities were reduced in numbers over the following years, the Auditoire, however, grew in importance as a focal point for both the Protestant Church of Geneva and the University.

The Consistoire (Governing Council) and the Company of Ministers of the National Protestant Church of Geneva were accommodated for a very long time in the Auditoire.  In 1947 both were transferred elsewhere.  By this time the fabric of the Auditoire had seriously deteriorated and in 1954, at the initiative of the World Alliance of Reformed Churches, it was decided to restore the Auditoire to its original gothic simplicity.  The work was completed in five years thanks to the generosity of the member churches of the Alliance and with donations from, among others, the Swiss Confederation and the City and Canton of Geneva.  The Auditoire was re-consecrated for worship in June 1959 and the Church of Scotland and the Italian Waldensian Church congregations returned right away and the Dutch Reformed Church congregation soon afterward.  At that time, all three congregations saw their numbers increase and reflect the multinational nature of Geneva’s population as the advent of the United Nations and many other international organisations and agencies and business companies in the second half of the 20th century brought people from all over the world to live and work in the city.

In November 2005 the three congregations came together, with the participation of the Protestant Church of Geneva, to celebrate the 450th anniversary of the beginning of worship in their own languages in the church, we now know as the Auditoire, in November 1555, with a glorious Service of Thanksgiving for the hospitality extended by Calvin and the City of Geneva.  An exhibition telling their story and that of the effect of the Reformation on all of Europe remains in the Auditoire, a continuing proof of the significant role of the Auditoire de Calvin in the historical records of the city.

In April 2007 a longstanding project of the Society of Sacred Art of the Protestant Church of Geneva reached a final stage: the installation of stained-glass windows in the Auditoire, created by a modern German artist, Udo Zembok, where the artist has presented his interpretation of the historical associations of the building and its connections with the Reformation and those whose names are a reminder of the light that the Reformation brought into the world.

2014 saw a complete refurbishment of the Auditoire to bring it into the 21st century.  This also saw the installation of a new organ. This has led to numerous concerts now being held in the Auditoire enabling many more people to worship, experience and appreciate this beautiful, historic building.